“Samba De Rendezvous”. That was the theme of 2011 much awaited Aspire! Dinner and Dance (in short Dnd).  It was not an ordinary Saturday, 17 December 2011, a night filled with Brazilian colours of green, yellow and blue where all the Aspire! Groups congregated at Hotel Rendezvous for this event of the year.
Kicking off the evening at 6.30 pm, Aspireans were occupied with range of pre-event activities while pre-cocktail were served.  Aspireans posted their glamorous shot putting on props readily available at the instant photo booth. A memento which they will always remember!  Some mingled amongst each other and made a stop at the Tattoo Spray and Limbo Dance booths.
As the door opened at about 7.30pm and Aspireans started pouring in passing through the Limbo Dance stick, members of the committee readied themselves to start the show.  The programme of the night included engaging games, mouth watering buffet dinner and of course the highlight, the Best Samba King and Queen. 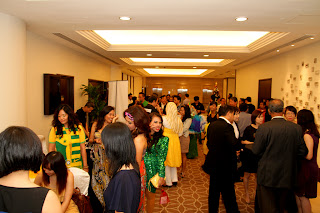 The evening’s programmes began with welcoming speech by the emcee. Then followed by the soft launched of “iExcellence” by Mr Rockey Michael, the General Manager of Aspire! Group Pte Ltd and followed by reciting the Aspire! Credo.   After the soft launched, dinner time!  While enjoying a wide assortment of international buffet, Aspireans were entertained by Zahir, CCPE from E6 and also the member of the committee with his hip-hop genre song.  An unexpected wonderful performance!
In the midst of the dinner, the emcee aroused Aspireans by involving them in an Ice Breaker Mass Game, ‘’Bingo”.  The enthusiasm and rowdiness at every table have created the party ambience. Then, followed by the first part of the night’s lucky draw kept the Aspireans on the edge of their seats.   Next, the ‘ra-ra’ stage game called “Most Wanted”.  Two participants were selected by the floor. This game involved most all of the Aspireans. The emcee called up for the items and Aspireans came forward with the said item and support one of their favourite participants.  Naturally, the game was well-received by the audience, who cheered for their friends on stage.
The second half of the lucky draw was then held.  The prizes were attractive ranging from hard drives to digital frame.  To keep spirits high, Aspireans once again participated in another game on stage called “MTV Game”.  Eight participants were invited on stage to act out the scene from different ethnic songs, Indian, Chinese, Malay and English guided by the emcee.  Participants were very spontaneous, awesome and hilarious indeed in their performance.
Next upcoming was a surprised and unexpected performance.  Aspireans were amazed by the emerging of the Samba Dancers from the back of ballroom’s entrance with their colorful costumes and headgears.  It is the culture on every DnD, the CEO and Managers will be prank on stage.  They were invited by the Samba Dancers on stage to samba and were dressed up with feather boa and handmade props made by the committee members.
The last game segment was the Samba King and Queen. It started with the Samba King to show their macho post while the Samba Queen put up impromptu appealing dance. Aspireans were then asked to vote for the “Best Samba King and Queen”. 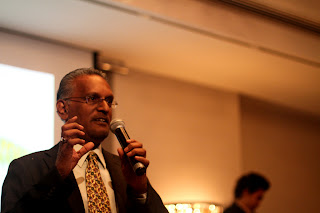 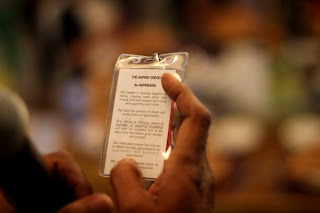 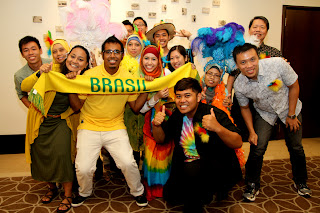 Before the final part of the lucky draw, the emcee invited the committees who have made this mega event possible on stage to take a bow, amid appreciative rounds of applause from the audience.  The final lucky draw prizes were even more attractive ranging from trip for two to Batam, digital camera, tablet and the grand prize of iPad 2. Aspireans were excited and enticed when the five top prizes were announced and the projection of the photographs of the prizes on screen.
This marked the successful conclusions of this year’s DnD, The programmes might have ended but some Aspireans were reluctant to leave, hanging around in the ballroom to take photos with their friends.  The Samba night will surely remain a fond memory of fun for every participating Aspireans.
Posted by Aspire! @ Play at 9:15 PM